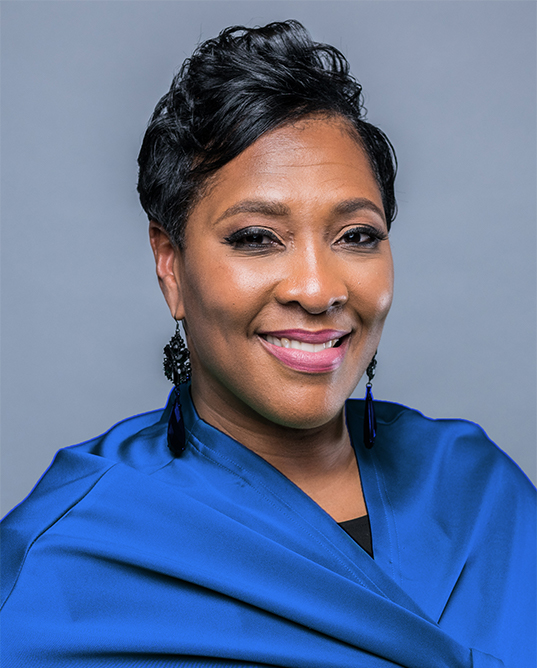 Sonya Taylor Stevenson is the wife of Pastor Byron C. Stevenson, founder of The Fort Bend Church in Sugar Land, Texas. She is a summa cum laude graduate of Southern University in Baton Rouge, Louisiana, where she received a B.S. in Accounting in 1990. Additionally, she has completed coursework in education and business administration at the University of Houston.
Borrowing from the phrase commonly used in education, “no child left behind,” as the Executive Director of The Fort Bend Church, Sonya firmly believes in this. She has personally adopted this philosophy when it comes to the children and youth of The Fort Bend Church and surrounding communities. Although spiritual in nature, the church is used as a vehicle to draw youth and children through creative ministry programming that provides constant exposure to the arts, educational opportunities, health awareness, and missions/outreach efforts.


Sonya pioneered KALEIDOSCOPE, a 501(c)3 organization, with a mission to develop youth as leaders and scholars. The vision began in 2010, with an inaugural luncheon to raise money for scholarships and enrichment programs. To date, KALEIDOSCOPE has contributed over $109,000 in scholarships, stipends, and programs that benefit youth and children in Fort Bend County and surrounding areas.
Beyond these efforts, Sonya is actively engaged and has received recognition and numerous awards for her work in the community including most recently the Houston Community College 2017 Unstoppable Leadership Award. She regularly supports educational initiatives in the Fort Bend Independent School District. She is passionate regarding her support of parents with children affected by Autism and thus pioneered the SPECTRUM Ministry that provides a spiritual network for parents and children and ensures a safe environment during worship and ministry activities.

Sonya serves on the board of the Baptist Standard Publishing Company. She has received numerous honors and awards. She is a member of The Links, Incorporated, Jack and Jill of America, Incorporated,(Associates Status), Delta Sigma Theta Sorority, Incorporated, and the Southern University Alumni Association.
Sonya’s career path has included work as an Internal Auditor and Financial Analyst for Exxon Chemical Americas. She also worked as a Budget Analyst, Career and Technology Education Teacher and Business Manager for the Houston Independent School District. She has also served as a guest lecturer alongside her husband at Princeton Theological Seminary.

Sonya is grateful for each assignment and recognizes it was all a part of a greater plan to place her in her current assignment. The experience and skills aided her in assisting her husband in establishing The Fort Bend Church in August of 2004, where they currently serve a congregation of over 7,000 members.
Sonya firmly believes in investing in the future of youth and children. Her goals include establishing a school that is an extension of the ministry of The Fort Bend Church, where students in the surrounding communities can be challenged academically while growing spiritually and be nurtured and developed into strong leaders of tomorrow.
The oldest of two girls, Sonya and her husband Byron are high school sweethearts. They are the proud parents of two daughters, Claire Alexandra and Cydney Victoria.